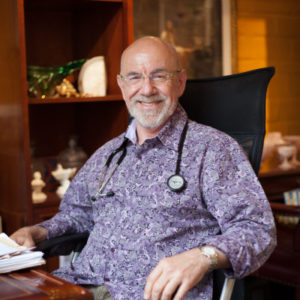 Dr. Roger LeBlanc received his Bachelor of Science with highest honours in Biochemistry at McGill University in 1973. He completed his medical studies at McGill University, obtaining his medical degree in 1978. He then completed a two-year residency in internal medicine and a two-year residency in infectious diseases at the Royal Victoria Hospital.

He received his FRCPC in 1981. From 1982 to 1996, Dr. LeBlanc worked as an internist and a consultant in infectious diseases at the Queen Elizabeth Hospital, a satellite teaching facility of McGill University, where he was Physician-in-Chief of internal medicine for 8 years. He is an assistant professor at McGill University and is involved in the care and monitoring of HIV-positive patients since 1981 where he remains heavily involved in the teaching and training of students and residents of McGill and is a well-known and respected lecturer.

Since 1996, he has managed a medical practice with a large urban community represented by nearly 400 HIV-positive patients, 800 gays and lesbians, many transgender people, as well as patients with hepatitis B and C.

Dr. LeBlanc has been heavily involved in clinical research in HIV since the late 80s, having participated in over 35 clinical studies from his own medical practice, and also as a member of the Montreal Chest Institute’s research team, recently renamed the “Chronic Viral Diseases Unit”. His main fields of expertise are the primary and tertiary care of people with HIV, sexually transmitted infections, disease prevention and harm reduction through lifestyle modifications, the metabolic syndrome and the long-term safety of drug therapy. He recently developed a strong interest in addiction medicine, especially the use/abuse of recreational drugs, medical care for transgendered persons and the screening for and treatment of hepatitis C.

Dr. LeBlanc serves on several pharmaceutical advisory committees at regional, national and international levels. He has given several conferences in Montreal, throughout Quebec, across Canada and throughout the United States and Europe to medical staff as well as local community groups.